How to Diversify your Facebook's news feed...

...but do Facebook's users bear some of that responsibility, too? The site's algorithm is complex, and inherently adaptive; it serves up content based on your behavior—after all, its only mission is keeping you online or for lack of better words HOOKED.

Here are a few straightforward ways you can get a news feed with a more diverse point of view, and pop that filter bubble.

1. Don't unfriend people based on their beliefs.

We get it, you're mad. Post all the rage you need to, commiserate with friends in comments, and even take a break from social media for a while. But don't unfriend Facebook friends because they don't share your worldview—even if you find that worldview distasteful or even dangerous. Unfriending people on Facebook doesn't make them go away, invalidate their beliefs, or convince anyone of yours.
Unfriending is, to borrow an apt metaphor, the digital equivalent of building a wall. It's a wall that'll create a safe space for you and the people you choose to let in, sure—but until you go beyond it, there's no way to know how big and passionate the group on the other side is. Or what they're thinking, and how they're articulating it.
If you still aren't comfortable being "friends" with someone whose beliefs you consider reprehensible, there is, actually, an alternative: Unfriend them, but make sure you follow them to make sure their posts will still appear in your news feed.

The thing about political commentary is there's always someone who disagrees with you. The act of putting forward a point of view on Facebook (which is certainly encouraged) has an implicit invitation of commentary and, yes, criticism. It really doesn't matter if you post publicly or privately to a group of friends: You're speaking, and people are entitled to respond. If you don't like those responses, reply, debate and clarify, but do not silence them.
Big distinction here: There's a world of difference between engaging in a discussion, however spirited, and hate speech. If someone responds to your posts with, say, racist or sexist epithets, then delete/unfriend/block away. Otherwise...

3. Engage with those you disagree with.


It's easy to dismiss the posts in your news feed that represent the other side as you scroll by them in the news feed. It's slightly harder to ignore the people commenting on your posts with serious disagreements, but not much. To get out of your filter bubble, do both.

Once a day, click on a link that you disagree with. When someone argues with you in a comment, before you even respond (and do respond), hit "Like" on that comment, even if you disagree. It's not an endorsement (or at least: it doesn't have to be). It actually signals to Facebook you're engaging with the comment and the person, and will steer content your way appropriately.

4. Read the comments on your friends' posts.

There will be people disagreeing in the comments. Engage with them. Maybe even follow them.

This goes without saying, but: Don't follow extremist or radical groups with offensive belief systems. That said, it won't kill you to follow Fox News (or, from the other side, the Huffington Post). Look at the sites, publications and personalities you follow that support your worldview, then ask yourself what their equivalent is on the other side. Be selective in your following, but do follow. And engage.

Don't tell anyone, but it's a dirty little secret of media that websites sometimes write misleading or hyperbolic headlines. Before you slam that share button, read what you're sharing, to make sure it really substantiates its claims. Otherwise, you'll simply be polishing the inside of your bubble, and it'll be even harder to see beyond the reflected nodding faces of you and your friends.

There have been many calls for Facebook to do something about fake news on its site, and it should. But you don't have to wait for them—you can do something about fake news stories the moment you see them. Go to the drop-down arrow in the top right, go down to Report post > I think it shouldn't be on Facebook > It's a false news story.
If you're already familiar with this box, you should probably stop (or at least go easy on) using the "It's annoying or distasteful" and "It goes against my views" options. Blocking things for going against your views is exactly what makes your filter bubble grow. That is, until it gets so big, and the forces on the other side so strong, that the entire thing implodes. Sound familiar?
Posted by SocialHazelFeather

Lets get up to speed with ChatBots. Chatbot is: Customer service and support in an automated form disguised to feel like a human. T... 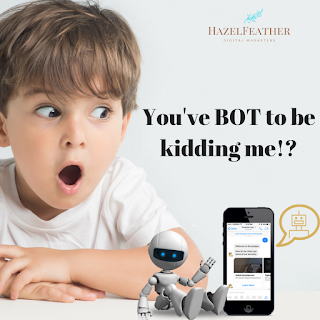